What is ADCC and why would you need it? 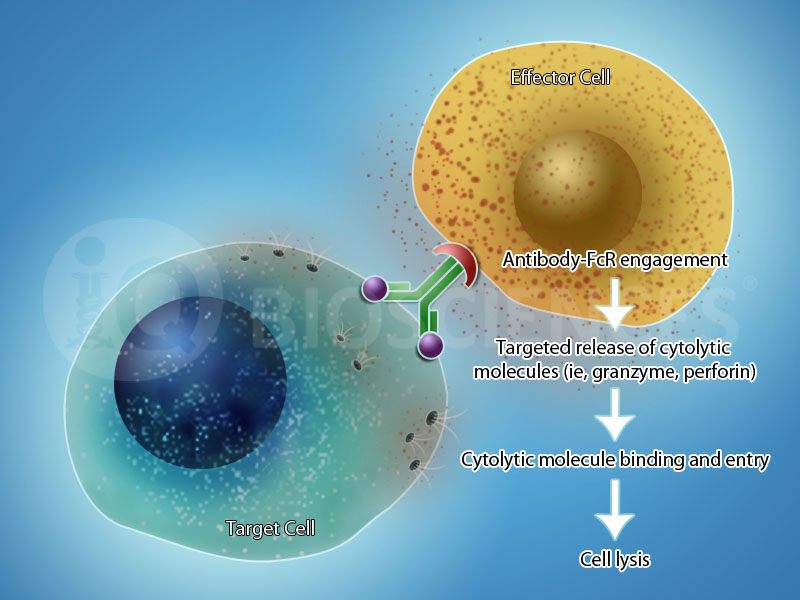 What is Antibody-Dependent Cell-Mediated Cytotoxicity?

What are the molecules and effector cell types involved in ADCC?

Several molecules play an important role in facilitating ADCC, including: (1) the antibody, (2) the cognate antigen, and (3) the Fc receptor. Antibodies mediate the recruitment of effector cells to target cells; therefore, this cytolytic mechanism would not proceed without antibodies. Also involved is the cognate antigen for the antibody, which has to be expressed in an abundant amount on the target cell surface. Without the antigen, the antibody cannot identify the target(s) to which to recruit the effector cell. A third component of ADCC is the activating Fc receptor, FcgRIIIa (CD16), which is present on the effector cell. Engagement of this receptor results in signaling cascades that activate the cell to secrete cytolytic molecules towards the target. These molecules include perforin and granzymes, where the former creates holes in the target while the latter are proteases that cleave molecules within the target cells.

ADCC can be mediated by a number of effector cell types. The most commonly known cell type is the Natural Killer (NK) cell, in which nearly the entire population expresses CD16. NK cells are part of the innate immune system and preloaded with cytokines and cytolytic enzymes, which are ready to be released upon cell activation. Other cell types that express CD16 include monocytes, macrophages, neutrophils, eosinophils, and dendritic cells, all of which can also mediate ADCC.

Why is ADCC important?

ADCC is very important for general human health as it eliminates foreign pathogens and aberrant cells that would otherwise promote illness. The body’s immune system will produce antibodies to coat pathogens or infected/diseased cells that express the antibody’s cognate antigen, which will subsequently recruit effector cells to trigger lysis and clearance.

Furthermore, because ADCC is considered a mechanism of action for therapeutic antibodies, there have been attempts to engineer antibodies that potentiate ADCC. One successful approach has been to remove the fucose sugar on the oligosaccharide chain linked to asparagine 297. Removing fucose increases the binding affinity between the Fc portion of the antibody and CD16, which leads to stronger signaling and more effector cells being activated for ADCC. Indeed, this strategy has led to two glyco-engineered antibodies, Gazyva (obinutuzumab) and Poteligeo (mogamulizumab), currently approved on the market. Notably, Gazyva has shown better efficacy in chronic lymphocytic leukemia patients in comparison to Rituxan, suggesting that the afucosylated form of these anti-CD20 antibodies is indeed more potent.

Stay tuned for Part 2 of our series, “ADCC: The Antibody Awakens…the Immune System”! We’ll be discussing when ADCC assays are used and the key considerations for performing them.