Antibodies with a Split Personality…(Part 2)

Antibodies with a Split Personality…(Part 2) 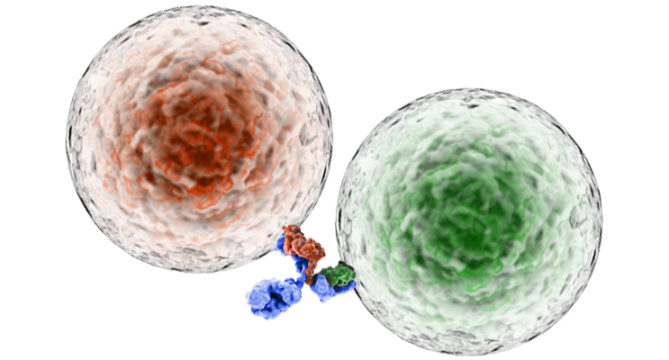 How were bi-specific antibodies initially created?

Each individual bivalent, monospecific antibody is composed of two identical heavy chains and two identical light chains, in which a single heavy chain combines with a light chain to create an individual target antigen recognition site.  Since there are two antigen binding sites per antibody, two heavy-light chain pairs combine and form a bivalent, monospecific antibody.  When producing these antibodies, only one heavy chain and its corresponding light chain is expressed by the cells because there is only one specific target antigen for the antibody.

Further difficulty in producing bi-specific antibodies stemmed from the need to correctly couple properly paired heavy and light chains with different antigen binding sites to provide the bi-specific recognition capability of these antibodies.  In many instances, the same (correctly paired) heavy-light chain combination, although functional, combined together to form a standard antibody with two recognition domains that bound the same antigen.  These antibodies are not the desired product since they lack the dual binding specificity of bi-specific antibodies.

The advancement and development of these unique antibodies was ushered forward by technical breakthroughs in protein engineering.  Most advances came as a result of forcing the correct interaction between heavy and light chains.  One of the first breakthroughs arrived in the form of the ‘knobs-into-hole’ technology in which the two different heavy chains were forced to pair with one another through the introduction of mutations in regions that interact.  Specifically, certain amino acids in the CH3 domain of one heavy chain were altered to resemble a knob structurally, while the amino acids in the CH3 domain of the other heavy chain were altered to produce a hole into which the knob could fit.  The different heavy chains were thus forced to pair with one another because of the structural compatibility and create an antibody with two different heavy chains, which was the goal.

For bi-specific antibodies without Fc regions, the advancement came in a simple format called the Bispecific T cell Engager (BiTE®) technology.  Here, two scFv molecules with two different binding recognition domains are connected by a flexible peptide linker.  A scFv fragment is a single polypeptide containing the variable regions of a heavy and light chain that fold into the antigen recognition domain of an antibody.  Thus, when connected through the linker, there are two antigen recognition domains on a single molecule.  These molecules, in contrast to antibodies with the Fc region, are smaller and may be able to better penetrate solid tumors.  However, due to the lack of the Fc portion, these antibodies have shorter plasma half-lives that may affect dosing.

Where do bi-specific antibodies go from here?

As partially evidenced here, there are numerous protein engineering technologies being investigated that are advancing the development and production of this promising class of molecules.  Each have their strengths and weaknesses, and their efficacy may be dependent on the end goal.

Join us next time for “Antibodies with a split personality…(Part 3)” when we discuss the assays designed for preclinical characterization of bi-specific antibodies that may identify their individual strengths and weaknesses, as well as those relevant to IND enabling studies.