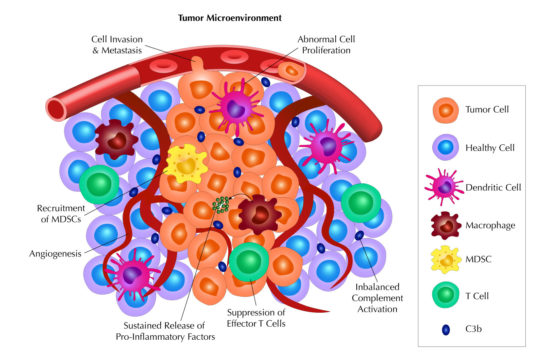 Complement in promotion of tumorigenesis. The imbalance and dysfunction of complement activity and activation can lead to various mechanisms that promote tumorigenesis. These mechanisms can have affects on the immune cells to provide a more favorable tumor growth environment, including: 1) recruitment of MDSCs, 2) suppression of effector T cell function, and 3) sustained release of pro-inflammatory factors for favorable tumor growth. In addition, loss of complement regulation has affects on non-immune cells that sustain tumor growth and metastasis, including: 1) angiogenesis, 2) abnormal tumor cell proliferation, and 3) cell invasion and metastasis. Please see our blogs for more details. Image adapted from Reis et al.

In our last blog, we revisited complement and discussed its new emerging roles in modulating beneficial responses of the immune system and potential target as a therapeutic.  However, like many aspects of the immune system, balance is extremely important and dysregulation of the complement system can lead to negative effects.  In this blog, we continue our summarization of Reis et al (Reis, ES, Mastellos, DC, Ricklin, D, Mantovani, A, and Lambris, JD.  Complement in cancer:  untangling an intricate relationship.  Nature Reviews Immunology, Volume 18(1), 5-18 (2018). doi: 10.1038/nri.2017.97) and review the findings that suggest the complement system can promote tumorigenesis and the mechanisms by which it is promoted.

Over the last decade, studies of the tumor microenvironment have discovered associations between imbalanced complement activation and cancer progression.  In the local tumor environment, complements are produced by various tissues, as well as tumor and stromal cells, and can be activated by tumor antigens.  For example, C1q has been detected on tumor vasculature in a preclinical cervical cancer model and been shown to bind phospholipid on lung tumor cell lines.  More so, increased indicators of complement activation, such as C4d, which is an indication of the classical pathway, has also been identified in patients with various types of cancer, including multiple myeloma, leukemia, and lymphomas.

The molecular trigger for complement activation is largely unknown; however, there is some scant evidence that tumor antigens can activate the complement cascade.  There is also speculation that glycolipids, glycoproteins, and mucins can possibly act as DAMPs to trigger complement.  Therefore, identifying the proteins that initiate complement activation will be of great value in order to design therapeutics that prevent unwanted activation.

How does complement promote tumorigenesis?

Recent preclinical models have helped advance the understanding of complement in tumorigenesis through the modulation of anti-tumor immune responses.  Studies have shown that MDSCs are recruited to the tumor environment by activation of C5a to suppress lymphocyte activation and promote antitumor response.  Specifically, immune-modulators such as CTLA-4, LAG3, ARG1, and PD-L1 expression has been associated with C5a-mediated activation of MDSCs in a preclinical lung cancer model.  Interestingly, cleavage of C5a is not complement pathway driven, but instead performed by serine proteases found on the surface of tumors cells.  Further, tissue coagulation-related proteases can activate C5 as well.  Thus, these studies suggest tumorigenesis is promoted by suppression of the immune response through upregulation of immune-modulatory molecules on MDSCs via C5.

Besides promoting the expression of immune-modulators, C5a can also influence the differentiation of effector CD4 and CD8 T cells to promote tumorigenesis.  Specifically, high levels of C5a has been associated with decreased numbers of IFN-g producing CD4 and CD8 cells in the spleen and lymph nodes, which diminishes the anti-tumor immune response.  In vitro experiments have further showed that increased concentrations of C5a can promote differentiation of CD4 cells into T regulatory cells, which suppress the activation and function of effector T cells.

In addition, complement, besides modulating the immune response, can promote tumorigenesis by acting directly on tumor cell growth and metastasis.  Studies have shown that C3aR and C5aR can signal in an autocrine manner to promote tumor cell proliferation by activating the PI3K pathway.  In addition, sublytic levels of C5b-C9 can induce cell cycle progression.  Finally, C3a and C5a can promote angiogenesis in models of melanoma and ovarian cancer.

Additionally, studies in various tumorigenesis cancer models have shown that increased production of complement proteins is associated with metastatic settings and establishment of a suppressed immune environment.  In addition, cancer cell motility and invasiveness has been observed with aberrant expression of C5aR1 in various cancers.

In summary, these studies illustrate how dysfunction of another immune component, in this case the complement system, can promote tumorigenesis.  Loss of regulation of complement can modulate the immune response by suppressing T cell response through generation of immune-regulatory proteins on MDSCs and suppressive T regulatory cells.  In addition, complement can act on tumor cells directly by promoting proliferation, and cell motility and invasiveness for metastasis.  Together, complement can act on various cell types in different cancer settings to promote an environment more conducive for tumorigenesis and metastasis.

In our next blog, we will conclude our series on summarizing Reis et al by reviewing aspects of targeting the complement system as a therapeutic.