The ABCs of ADCs: An Introduction to Antibody-drug Conjugates

The ABCs of ADCs: An Introduction to Antibody-drug Conjugates

The terms “warhead” and “payload” typically invoke impressions of weapons and destruction. However, in a more constructive and positive light, these terms are now also commonly associated with antibody-drug conjugates (ADCs), a class of biologics used to treat cancer. These warheads and cytotoxic payloads are an integral part of ADCs that drive tumor cell death. Coupled to antibodies, ADCs combine the advantage of both modalities to be a potent class of anti-cancer molecules.

In this blog, we will discuss the components that make up ADCs, what they are used for, and the future for this class of biologics. 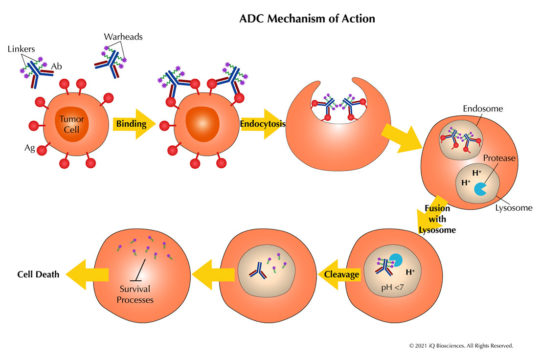 What are ADCs and why develop them?

Therapeutic antibodies on the market, such as those that target HER2 and CD20, have changed cancer treatment due to their ability to target antigens specifically expressed (or overexpressed) on tumors. This has resulted in fewer side effects as these antibodies selectively bind tumor cells and predominantly drive the therapeutic mechanism of action in these cells. In contrast, cells that do not express the target will not bind the antibody and therefore, will not be affected. However, the drawbacks for this type of therapy are that these antibodies cannot target intracellular molecules and the mechanistic understanding in patients is incomplete.

Small molecule compounds/inhibitors, which have also significantly changed cancer treatment over the years, can target intracellular molecules and processes. The mechanism by which DNA damaging and microtubule disrupting agents target intracellular DNA replication and cell cycle progression is well known. They can pass the plasma membrane through different mechanisms to bind targets and drive downstream effects by inhibiting molecules and cellular processes, which ultimately results in tumor cell death. In addition, small molecules can be altered with medicinal chemistry to improve affinity and/or specificity against intracellular targets. However, delivering these molecules to the cytoplasm of specific tumor cells in order to drive their effects has been a challenge. Because small molecules can permeate through many cell types, there is a lack of cell specific targeting that increases side effects and toxicity. So while there are more potential compounds available to target intracellular proteins and pathways with this modality, there is a lack of target cell specificity.

To take advantage of the benefits of these small molecules and offset their limitations, researchers have combined them to develop ADCs, a class of molecules that simultaneously have the specificity of antibodies to target certain cell types and the ability to target intracellular proteins and processes with a broad set of cytotoxic agents. This leads to a potent therapeutic molecule that has specificity and cytotoxic effects. The main components of an ADC are: 1) the antibody, 2) the “warhead” or cytotoxic payload, and 3) the linker that connects the antibody to the payload. Below, we’ll discuss the characteristics of each component.

The anatomy of ADCs

The antibody portion may be the most important part of the ADC molecule since it targets the ADC to the tumor cell in order to deliver the cytotoxic payload. Therefore, selecting the correct target antigen is quite important. Criteria for selection of the antigen is similar to that of monoclonal antibody therapy in which the antigen must have high expression on the tumor with low to no expression in healthy cells. In addition, the antigen should be found on the extracellular surface of the tumor cell so that the antibody has access to it. Finally, the antigen should be capable of internalization in order for the ADC molecule to enter the cell and expose the payload to the intracellular target. Surface proteins internalize at different rates so proteins that do not internalize efficiently should be avoided.

The cytotoxic payload or “warhead” is the part of the ADC that binds the intracellular target to disrupt cellular processes to promote cell death. Typically, there are two types of these small molecules: 1) DNA damaging agents and 2) microtubule disrupting agents.

DNA damaging agents are molecules that interact with DNA to affect its role in various processes. One common class of agents on ADCs are duocarmycins, which act by binding to the minor groove of DNA. This leads to the alkylation of DNA that affects its structure and promotes the subsequent breakdown of cells. Another group is calicheamicins, which also binds the minor groove. However, these agents prevent DNA replication to promote cell death. Doxorubicin represents another class of DNA damaging agents found on ADCs, and it prevents DNA synthesis by intercalating between the nucleic acids.

Microtubule disrupting agents work by preventing cell division. MMAE, which is derived from auristatin, works by inhibiting the tubulin polymerization process to arrest cell-cycle progression and promote apoptosis. A second class of microtubule disrupting agents are the maytansinoids. They too block tubulin polymerization that results in mitotic arrest and cell death. Many derivatives of this class are quite potent and have been used as the cytotoxic agents on ADCs in the clinic.

One of the more overlooked parts of the ADC that is just as important as the other two is the linker. It connects the cytotoxic payload to the antibody and provides stability to the ADC so that the payload is released within the specific tumor cell. Off-target issues and potential toxicity may arise if the payload is not targeted appropriately. However, the linker must also know when to be “activated” to release the payload from the antibody once it is internalized within the target cell. Currently, there are two types of linkers: 1) noncleavable and 2) cleavable.

Noncleavable linkers are typically resistant to proteolytic degradation and more stable than cleavable linkers. ADCs with this type of linker are internalized intact and then degraded within the lysosome of the tumor cell. As part of the degradation process of the ADC, the warhead is released into the cytoplasm of the cell to promote cell death.
In contrast, the more common type of linker is the cleavable linker, which is processed under more specific environmental conditions of the lysosome. The pH in lysosomes are low so there are pH sensitive linkers that are cleaved under acidic conditions. Similarly, there are lysosome-specific proteases, or enzymes which break down proteins and peptides, that can be taken advantage of to cleave linkers sensitive to these proteases. Finally, there are glutathione sensitive linkers that are cleaved due to the redox potential between the cytoplasm and extracellular environment.
Future development of ADCs

As reflected above, there is quite a bit of work being done to further develop and optimize ADCs. In terms of antibody engineering, there are efforts to increase the half life of ADCs by adding polyethylene glycol to stabilize the antibody during circulation. Additionally, research is being done on increasing the penetration of these molecules into the tumor. Bispecific antibodies, another class of therapeutic antibodies, are also being considered as the antibody portion of ADCs as they have the ability to target multiple cell types.

Other ADC development efforts have focused on new cytotoxic agents being employed as payloads. Agents, such as amatoxin, can inhibit RNA polymerase activity to prevent transcription, while thailanstatin A and spliceostatin C are inhibitors that affect splicing for RNA processing. Similarly, nitric oxide, known to promote toxicity of tumor cells, is currently being tested as a potential payload for some ADCs. Besides these molecules, there are continuing efforts to identify new DNA damaging agents. One class includes the pyrrolobenzodiazepines, which are DNA-alkylating molecules that are employed as payloads on ADCs currently in clinical trials.

Small molecules that target specific signaling pathways that are immuno-stimulatory are also being considered as payloads on ADCs. The concept is similar to ADCs that target tumor cells, except the antibody is directed towards antigens found specifically on immune cells. This will deliver the payload specifically to immune cells. In addition, rather than cytotoxic effects, the small molecules promote the inflammatory properties, such as antigen presentation, cytokine production, and cytotoxicity, to stimulate anti-tumor response. One such ADC currently in development targets the toll-like receptor TLR8, which is expressed in antigen presenting cells, to promote antigen presentation and their downstream effects on anti-tumor response via T cell activation.

A considerable amount of work has also been done on linker optimization. One of the focuses is the drug antibody ratio (DAR), which has been associated with drug stability and activity. With an increase in DAR, there is an increase in hydrophobicity, which leads to faster clearance and decreased drug exposure. Highlights from these efforts demonstrate that linkers can have direct effects on DAR to influence these characteristics.

How do ADCs work?

Once internalized, the ADCs reside in the endosomes, which subsequently fuse with lysosomes. Within the low pH environment of the lysosome and in the presence of lysosome-specific proteases, the cytotoxic payload is released from the ADC into the cytoplasm depending on the sensitivity of the linker. Once in the cytoplasm, the small molecule can affect cellular processes to induce tumor cell death.

Current ADCs on the market

As of May 2021, there are currently 11 ADCs on the market that target a variety of indications. The first one on the market was an antibody conjugated to calicheamicin that targeted CD33. Other antigens include CD30, Trop2, HER2, CD22, CD79b, Nectin-4, and BCMA. Additionally, the cytotoxic payloads conjugated to antibodies include MMAE, derivatives of maytansinoids, MMAF (derivative of aurastatin), and irinotecan. Furthermore, a variety of linkers have also been used including ones that are pH sensitive and susceptible to lysosomal proteases. As described here, there are a variety of permutations for development of these molecules. However, further research is being performed to determine the optimal combination of antibody, linker, and cytotoxic payload.

ADCs currently on the market have been approved for a variety of indications. CD33 positive AML was the first indication for ADCs and a number of other indications have followed for other ADCs. These include Hodgkins lymphoma, ALL, AML, multiple myeloma, hairy cell lymphoma, and DLBCL. HER2 positive and triple negative breast and urothelial cancers are solid tumor indications that have also been approved for treatment with ADCs. Together, ADCs are a class of therapeutic molecules suitable for various indications.

There are numerous ADCs in clinical trials and they target a variety of antigens and indications. There are over 60 trials sponsored by numerous companies, including Seattle Genetics, Roche, Bristol Myers Squibb, and AstraZeneca. Other companies, such as Daiichi Senko, Silverback, and Bolt, also have quite a few molecules in their pipeline. In terms of antigens, familiar targets with an abundance of previously performed research include CEACAM, c-Met, LIV-1, HER3, and mesothelin. Finally, these antigens are ADC targets for numerous indications that encompass lung, gastric, and pancreatic, and many ADCs are in basket trials for solid tumor indications with these antigens.

ADCs show a tremendous amount of potential as a therapeutic class of molecules for cancer treatment. These molecules combine the specificity of antibodies and the ability to target intracellular molecules. There has been a lot of work already performed and researchers are leveraging these efforts to further develop and optimize ADCs. There is also quite a bit of upside as there is room to improve the antibody, linker, and cytotoxic agent. Overall, ADCs are an important class of therapeutic molecules that show promise, now and in the future, for cancer treatment.

At iQ, we have developed an antibody internalization assay that employs quality reagents and standards. In addition, with our knowledge of factors that influence internalization, iQ can help design the right experiments for you to determine the potential of your ADC.