The Power of Complements… (Part 1)

The Power of Complements… (Part 1)

What is CDC and why would you need it? 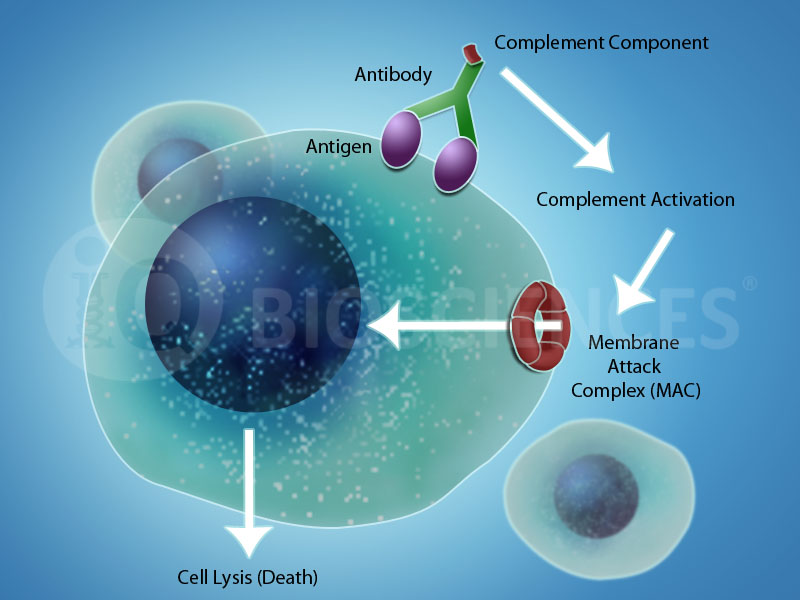 What is Complement-Dependent Cytotoxicity?

Complement-Dependent Cytotoxicity (CDC) is a form of cytotoxicity mediated by the host organism’s complement system. Components of the complement system become activated by three main mechanisms and all pathways lead to the formation of the membrane attack complex (MAC) on a target cell or organism. This MAC creates an opening in the plasma membrane of the cell or organism to drive death by osmotic lysis.

What is the complement system and what are its associated pathways?

A host organism’s complement system consists of over 30 proteins, including cell membrane receptors, serosal proteins, and serum proteins. These proteins are inactive until a trigger is received, whereupon complement proteins are cleaved into their active forms to initiate a cascade of complement protein cleavages. This cascade of cleavages results in the formation of the MAC, which creates openings in the plasma membrane of the target cell to promote death by osmotic lysis. Furthermore, activation of the complement system leads to the release of cytokines that promote immune cell homing and activation.

There are three main pathways associated with complement system activation. The first is the classical pathway (Figure 1), which is mediated by IgM or IgG antibodies complexed with cell surface antigens and C1q of the complement system. Formation of the antibody/antigen complex recruits C1q to the target cell/pathogen and promotes the formation of the C1 complex. The establishment of this complex on the foreign cell initiates a protein cleavage cascade that results in MAC formation on the target cell and its eventual lysis.

Figure 1. Classical Complement Pathway. The classical complement pathway is mediated by IgG and IgM antibodies binding to their respective cognate antigens on the surface of target cells. This initiates a cascade of complement protein cleavages that result in the formation of the MAC.

Why is CDC important?

In addition to its importance as a mechanism for clearing foreign pathogens and aberrant cells, CDC is a reported mechanism of action for therapeutic antibodies. Rituximab, an anti-CD20 antibody approved for a variety of B cell-related cancers, has been reported to mediate CDC and suggested as a mechanism of action for its therapeutic efficacy. Similarly, ofatumumab, another CD20 antibody approved for B cell-related cancers, has also demonstrated the ability to mediate CDC.

Because these findings suggest that CDC is an important mechanism of action for therapeutic antibodies, a current strategy to identify potential therapeutics is to screen for candidate antibodies that exhibit CDC activity. Furthermore, there are some attempts to engineer antibodies to promote CDC activity. Together, they illustrate the importance of potentiating CDC in the development of therapeutics.

Stay tuned for Part 2 of our series, “The Power of Complements…”! We’ll be discussing when complement-dependent cytotoxicity (CDC) assays are used and the key considerations for performing them.