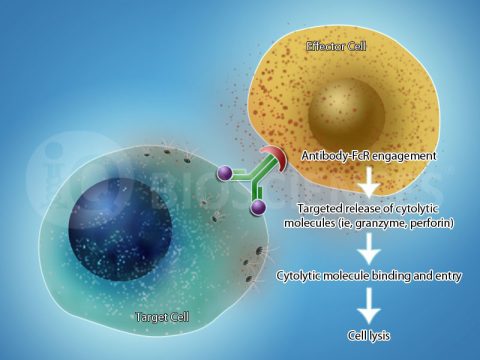 iQ has extensive experience with ADCC assays and can help you design the best experiment, keeping in mind factors that influence ADCC to determine the ADCC potential of your therapeutic antibodies.  Because there are multiple components to ADCC, three well-studied factors can enhance or decrease ADCC:

At iQ, we have moved away from traditional cytotoxicity assays that typically load target cells with radioactive chromium, which is released upon lysis.  Instead, we load target cells with an intracellular nonradioactive dye called calcein, which is also released into the supernatant upon lysis and can be measured using a luminometer.  This method offers a safe, high throughput method for assessing ADCC experiments that incorporate multiple molecules and conditions.

We can also perform ADCC assays by flow cytometry, wherein target cells are labeled with a fluorescent dye.  After the co-culture, samples are analyzed in the cytometer to assess loss of target cells in the culture.  Compared to the calcein release assay, this assay is not as high throughput; however, it provides more sensitivity as it directly interrogates cell loss.

With our extensive knowledge of factors that influence ADCC and our wide array of readouts for ADCC, iQ can help design the right experiments for you to determine the ADCC potential of your therapeutic antibodies.

Interested in learning more about our ADCC Bioservices?  Complete the form below to request a Fact Sheet.