Different subsets of human B cells are found in the blood with each population classified according to their maturation stage. In a typical adult, approximately 2% of circulating B cells are of the immature type, still undergoing development to become a naïve B cell capable of recognizing antigen. Once B cells finish development, they become naïve B cells, which account for 60-70% of the B cells found in the blood. These cells simultaneously express IgM and IgD and have not undergone somatic hypermutation. Some naïve B cells that have experienced antigen become memory B cells, which comprise 20-30% of total circulating B cells. These cells have undergone somatic hypermutation, display mutations in their Ig variable regions, and may have also undergone Ig class switching. The last subset of circulating B cells, which can be derived from naïve and memory cells, are plasmablasts. This cell population makes up approximately 2% of circulating B cells and function to produce antibodies. Each of these four subsets can be distinguished by their cell surface markers.

Purified human B cells are a good source of cells to study the biology of B cells and their role in the immune system. B cells are responsible for presenting antigen to T cells, producing certain cytokines, and most importantly, producing antibodies. Thus, B cells can be used for a variety of functional assays, including ELISAs for production of cytokines and antibodies, proliferation assays, and plaque-forming cell assays.

The negative isolation of B cells leaves them untouched without any antibody binding to cell surface markers. This leaves all cell surface proteins eligible to be bound to antibodies or other molecules for functional or population characterization studies.

In contrast, positive isolation of B cells may lead to internalization of the marker that was used to isolate the cells.  In most cases, these markers are only used for identification purposes and may not have any effect on function, but it will depend on the organism and function.  Therefore, cells isolated using this method may also be employed for functional or population characterization studies with the knowledge that the isolation marker may be internalized and not present.

Isolation of Human B cells

To enrich for B cells by the negative isolation method, PBMCs were incubated with antibodies against T cells, NK cells, dendritic cells, monocytes, granulocytes, and erythrocytes in a test tube, which was subsequently subjected to a magnet. Cells labeled with the antibodies bound to the magnet through the test tube wall, while unlabeled cells, the B cells, were decanted into a fresh tube to obtain the enriched population.

For the positive selection method, PBMCs were incubated in a test tube with antibodies against a B cell-specific marker and subsequently subjected to a magnet, similar to negative isolation.  However, the cells that were decanted into the fresh test tube were the non-B cells, which can be used for other purposes, while the labeled B cells were left bound to the magnet through the test tube wall.  The test tube was then removed from the magnet to release the purified B cells directly into the test tube.

Contact us for more information about purchasing our magnetically isolated B cells.

A small aliquot of cells was tested for post-sort purity by flow cytometry analysis. Purity of B cells, as defined by CD19 expression, was > 90% (Figure 1). 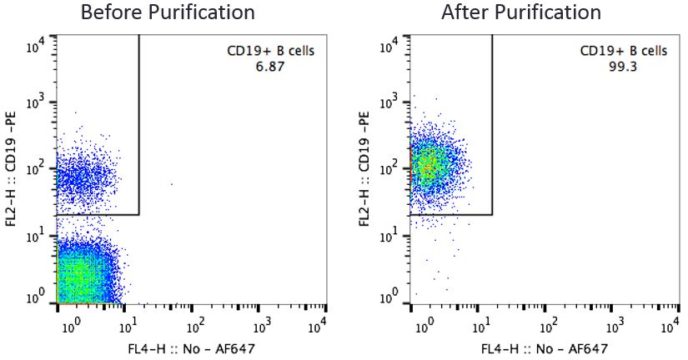 Figure 1. Purity of B cells after negative magnetic isolation from PBMCs.  In this representation, human PBMCs were incubated with antibodies against T cells, NK cells, dendritic cells, monocytes, granulocytes, and erythrocytes and subjected to negative magnetic isolation to obtain untouched B cells.  A small aliquot was taken after selection to evaluate post-sort purity (right).  Percent of CD19+ cells in PBMCs is also shown (left).