The cynomolgus macaque is the most commonly utilized non-human primate in biomedical research.  According to some researchers, these monkeys are ideal models due to the 90-93% genetic similarity to and recent evolutionary divergence from humans.  They are employed in numerous research areas, such as immunology, neuroscience, oncology, diabetes, and pharmacology due to their genetics and physiology.

CD4 T cells develop in the thymus to become mature T cells and exit the thymus to reside and encounter foreign pathogens in lymphoid tissues.

Purified cynomolgus CD4 T cells are a good source of cells to study the biology of CD4 T cells and their role in the immune system. They can be used for a variety of stimulation-dependent functional experiments to assess cytokine production and proliferation.

With the current trend toward development of immuno-modulatory drugs, CD4 T cells are an ideal source of cells to test cytokine response in the presence of therapeutic molecules.  More importantly, cynomolgus T cells can be used to assess toxicity and safety characteristics of these biologics in the presence of CD4 T cell activation before first in-human trials.  These cells are commonly employed in pre-clinical settings to ensure biologics are not eliciting unwanted functions, specifically from CD4 T cells.

The negative isolation of CD4 T cells leaves them untouched without any antibody binding to cell surface markers that may influence function. This method leaves all cell surface proteins eligible to be bound to antibodies or other molecules for functional or population characterization studies.

In contrast, positive isolation of CD4 T cells may lead to internalization of the marker that was used to isolate the cells.  In most cases, these markers are only used for identification purposes and may not have any effect on function, but it will depend on the organism and function.  Therefore, cells isolated using this method may also be employed for functional or population characterization studies with the knowledge that the isolation marker may be internalized and not present.

Cynomolgus PBMCs were sourced from a responsible third party vendor that operate according to local regulations and laws.

To enrich for cyno CD4 T cells by the negative isolation method, PBMCs were incubated with antibodies against CD8 T cells, B cells, NK cells, dendritic cells, monocytes, granulocytes, and erythrocytes, and subsequently subjected to a magnet. Cells labeled with the antibodies bound to the magnet through the test tube wall, while unlabeled cells, the CD4 T cells, were decanted into a fresh tube to obtain the enriched population.

For the positive selection method, PBMCs were incubated in a test tube with antibodies against a CD4 T cell-specific marker and subsequently subjected to a magnet, similar to negative isolation.  However, the cells that were decanted into the fresh test tube were the non-CD4 T cells, which can be used for other purposes, while the labeled CD4 T cells were left bound to the magnet through the test tube wall.  The test tube was then removed from the magnet to release the purified CD4 T cells directly into the test tube.

Contact us for more information about purchasing our magnetically isolated CD4 T cells.

A small aliquot of Cyno CD4 T cells was tested for post-sort purity by flow cytometry analysis. Purity of CD4 T cells, as defined by CD4 expression, was > 97% (Figure 1). 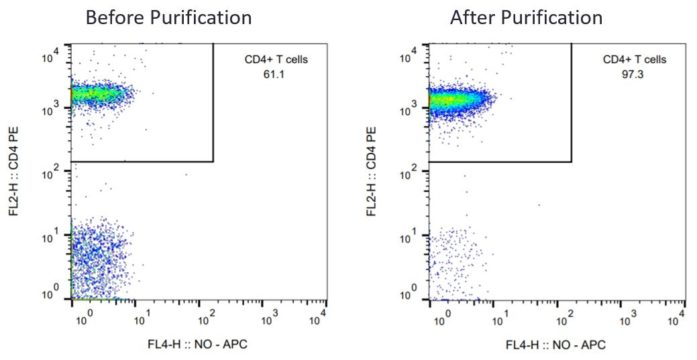 Cells should be stored at < -120 °C once they are received, such as within a liquid nitrogen tank (vapor phase).

We are happy to accommodate the following donor requests if inventory is available. Feel free to inquire prior to ordering, or specify your interest in the "Order notes" section during checkout and we will follow-up with your shortly after your order is processed:

iQ Biosciences’ primary cell products from non-human primates are collected under approved IACUC protocol, which was developed in consultation with the Attending Veterinarian and is consistent with current veterinary standards. The collection facility is AAALACi and PHS accredited, and all animal housing, handling, and research protocols are consistent with standards set forth by the Animal Welfare Act, NIH's Policy on Humane Care and Use of Animals and the Guide for the Care and Use of Animals. All animal housing and handling is done in such a way to minimize stress and risk of injury to the animal.