Neutrophils are the most abundant type of granulocytes and white blood cells in the human. They are part of the innate immune system and make up one of the three members of the polymorphonuclear cell family, along with basophils and eosinophils. These short-lived cells are often implicated as one of the first responders to microbial infections in which they migrate to the site of entry and begin to secrete chemokines and cytokines. This promotes the recruitment of other immune cells to resolve the infection.

Another function of neutrophils is the degranulation of antimicrobial proteins. These proteins are contained in granules that are secreted after activation of the neutrophil, and lead to destruction of microbes.

Purified human neutrophils are a good source of cells to study its role in the immune response. They can be used in functional studies to assess neutrophil response to stimuli, such as bacteria, in the presence of molecules that may promote or reduce function. In these experiments, neutrophils are cultured in the presence of the stimuli and molecules, followed by interrogation of chemokines and cytokines. Additionally, phagocytosis studies can be performed to assess the ingestion of microbes. There are also reports that indicate neutrophils have cytotoxic capabilities. Therefore, cytotoxicity of foreign objects can also be assessed. Finally, neutrophils can be used in migration assays to study their movement in the presence of soluble factors.

Recently, neutrophils have also been shown to have anti-cancer abilities. Therefore, many biotechnology companies are developing molecules to take advantage of these findings. Similar experiments as described above can be performed with neutrophils co-cultured with tumor cell lines in the presence of therapeutic molecules. This is followed by examination of soluble factors and/or cytotoxicity.

Whole blood from verified healthy donors were obtained at a world-renowned blood center.

Following enrichment, a small aliquot of cells was taken to test for post-sort purity by flow cytometry analysis. Purity of neutrophils, as defined by CD16+CD45+CD66b+ expression, was > 98% (Figure 1).

Figure 1. Purity of neutrophils after negative magnetic isolation from whole blood. Whole blood was incubated with antibodies against non-neutrophils and subjected to negative magnetic isolation. A small aliquot was taken after selection to evaluate post-sort purity by CD16, CD45, and CD66b. Percent of CD45+ cells after isolation (left), and percent of CD16+CD66b+ cells in the CD45+ population (right) is shown.

Isolated neutrophils were also tested for function using a migration assay. In these experiments, cryopreserved isolated human neutrophils were thawed, resuspended, and incubated in a 3 uM pore size transwell plate to measure migration towards FBS as a chemoattractant. Cell lysis and subsequent CyQuantGR ™ fluorescent-labeling of DNA was used to calculate the number of neutrophils that migrated across the transwell. Cell migration of cultures with 1% FBS and no serum control are shown in Figure 2. 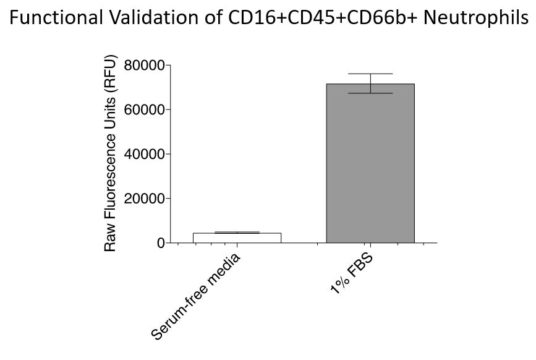 Figure 2. Migration of purified CD16+CD45+CD66b+ neutrophils. Cryopreserved human neutrophils were thawed, resuspended in serum free media, and incubated for 24 hours at 37C, 5% CO2 in a 3 uM pore size migration transwell plate to measure migration towards 1% FBS as a chemoattractant, or serum free media as a control. Cell lysis and subsequent CyQuantGRTM fluorescent-labeling of DNA was used to calculate the number of neutrophils that migrated across the transwell. Number of migrated cells in cultures with 1% FBS or no serum control are shown.

We implement random sampling per lot to test for viability and cell counts to ensure they meet specifications, which are recorded on the Certificate of Analysis that is included with each shipment. Cell counts are obtained using a manual hemocytometer and then cross-referenced with an automated cell counter. Each lot is also characterized for unique cell populations by immunophenotyping, in which the results are also recorded on the Certificate of Analysis.