About the Sprague Dawley Rat

The Sprague Dawley (SD) rat is one of the two most widely-used outbred rat strains in biomedical research, including oncology, neurobiology, toxicology, pharmacology, aging, metabolism/nutrition, and neurobiology. Derived from the Wistar rat strain, the Sprague Dawley rat is also routinely employed in the field of immunology research as a model for autoimmune diseases and immunogenic challenges against pathogens. Thus, cells from Sprague Dawley rats (like SD rat PBMCs) may offer experimental advantages depending on the parameters of your experiments.

SD rat CD3 pan T cells consist of both CD4 and CD8 T cells, and make up approximately 50-65% of PBMCs in a typical SD rat.  All T cells carry the CD3 protein marker and the T cell receptor (TCR), which recognizes foreign antigens presented by major histocompatibility complex molecules on antigen presenting cells to activate them.

T cells develop in the thymus to become mature CD4 or CD8 T cells and exit the thymus to reside and encounter foreign pathogens in lymphoid tissues.

When activated, CD4 T cells will become T helper subsets to secrete cytokines to boost either the humoral or cell-mediated immune response. In contrast, CD8 T cells, when stimulated, will become cytotoxic T cells that can lyse infected or transformed cells.  Together, these two main subsets work to clear infections or diseased cells.

Purified SD rat T cells are a good source of cells to study the biology of T cells and their role in the immune system. T cells are responsible for producing cytokines and performing cytotoxicity.  Thus, pan T cells can be used for a variety of stimulation-dependent functional experiments to assess cytokine production, proliferation, and cytotoxicity.

Rat SD T cells can be used to assess toxicity and safety characteristics of biologics that target the immune system.  Many preclinical drug development experiments using rat T cells are performed before first in-human trials to ensure biologics are not eliciting unwanted functions.  Other preclinical uses for rat SD T cells also include testing T cell response in the presence of therapeutic molecules that modulate the immune system.

The negative isolation of pan T cells leaves them untouched without any antibody binding to cell surface markers that may influence function. This method leaves all cell surface proteins eligible to be bound to antibodies or other molecules for functional or population characterization studies.

In contrast, positive isolation of pan T cells may lead to internalization of the marker that was used to isolate the cells.  In most cases, these markers are only used for identification purposes and may not have any effect on function, but it will depend on the organism and function.  Therefore, cells isolated using this method may also be employed for functional or population characterization studies with the knowledge that the isolation marker may be internalized and not present.

SD rat PBMCs were sourced from a responsible third party vendor that operates according to local regulations and laws.

To enrich for SD rat CD3 pan T cells by the negative selection method, PBMCs were incubated with antibodies against B cells, NK cells, dendritic cells, monocytes, granulocytes, and erythrocytes, and subsequently subjected to a magnet. Cells labeled with the antibodies bound to the magnet through the test tube wall, while unlabeled cells, the CD3 pan T cells, were decanted into a fresh tube to obtain the enriched population.

For the positive selection method, PBMCs were incubated in a test tube with antibodies against a pan T cell-specific marker, which will vary depending on the species of the organism, and subsequently subjected to a magnet, similar to negative isolation.  However, the cells that were decanted into the fresh test tube were the non-pan T cells, which can be used for other purposes, while the labeled pan T cells were left bound to the magnet through the test tube wall.  The test tube was then removed from the magnet to release the purified pan T cells directly into the test tube.

Contact us for more information about purchasing our magnetically isolated pan T cells.

A small aliquot of cells was tested for post-sort purity by flow cytometry analysis. Purity of pan-T cells, as defined by CD3 expression, was > 95% (Figure 1). 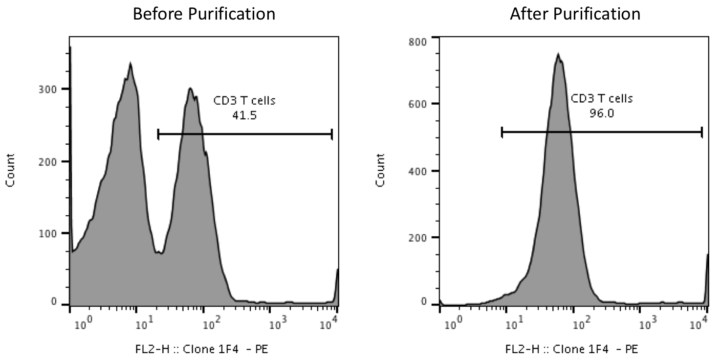 Figure 1. Purity of pan-T cells after negative magnetic isolation from PBMCs.  In this representation, SD rat PBMCs were incubated with antibodies against B cells, NK cells, dendritic cells, monocytes, granulocytes, and erythrocytes and subjected to negative magnetic isolation to obtain pan-T cells by negative selection.  A small aliquot was taken after selection to evaluate post-sort purity (right).  Percent of CD3+ cells in PBMCs is also shown (left).