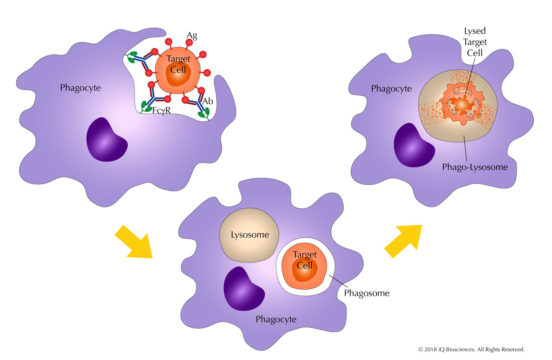 ADCP can play roles in general human health and mechanism of action for therapeutic antibodies. First, it can eliminate foreign pathogens, such as bacteria and viruses, that would otherwise promote illness in general human health. Second, it is suggested that ADCP may be a mechanism of action for some therapeutic antibodies, such as those that target CD20 and CD52. Over the last few years, more and more drug development programs are screening potential therapeutic antibody candidates for ADCP activity to identify ones that will have the most potent anti-cancer abilities.

iQ’s ADCP Assays:  Designed with Your Goals in Mind

iQ has extensive experience with ADCP assays and can help you design the most appropriate experiments by incorporating factors that influence ADCP.  Because there are multiple components to ADCP, three well-studied factors can enhance or decrease ADCP:

At iQ, we can perform ADCP assays with a reporter cell line or primary cells.  In the reporter cell assay, a modified Jurkat cell line expressing the high-affinity form of FcgRIIa (H-131) expresses luciferase upon engagement of the receptor with the antibody.  Expression of luciferase can be detected with a luminometer after addition of a substrate.  With this assay, we are not measuring phagocytosis of any cells, but the engagement and activation of the Fc receptor that is responsible for this process.  However, this is a high throughput assay that can be used to screen molecules much more quickly than assays that employ primary cells. See Figure 1 for an example of our ADCP assays using a reporter cell line.

Figure 1. ADCP assay using FcgRIIa expressing reporter cell line. Modified Jurkat cell line expressing FcgRIIa were co-cultured with target cells in the presence of a test article (4) or negative control antibody. Substrate was added to assay for luciferase expression, which is regulated by FcgRIIa engagement with test antibody. Plates were read on a luminometer and results were reported as relative light units.

In contrast, our ADCP assays that use primary cells measure true phagocytosis by assaying for internalization of target cells.  Here, target cells are fluorescently labeled and cultured with effector cells, such as monocytes or macrophages, in the presence of your therapeutic antibody.  Flow cytometric analysis is subsequently performed to determine the percentage of effector cells that are positive for the target cell based on its corresponding fluorescent marker.  This method offers measurement of a more biologically relevant functional process in contrast to the reporter cell line.  However, this method requires more cell manipulation and may require more time to perform.  See Figure 2 for an example of our ADCP assays using differentiated macrophages. Depending on your requirements, iQ Biosciences can recommend the best experimental method for your goals. 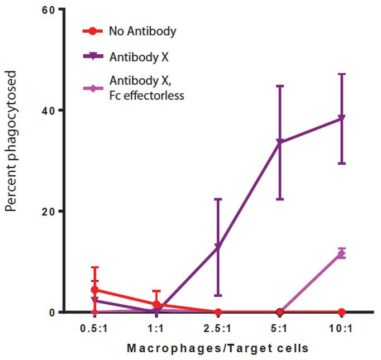 With our extensive knowledge of factors that influence ADCP and our flexible readouts for ADCP, iQ can help you design the right experiments to determine the ADCP potential of your therapeutic antibodies.

Interested in learning more about our ADCP Bioservices?  Complete the form below to request a Fact Sheet.