It’s All About the Mice: How the Mouse is Used in Research

It’s All About the Mice: How the Mouse is Used in Research 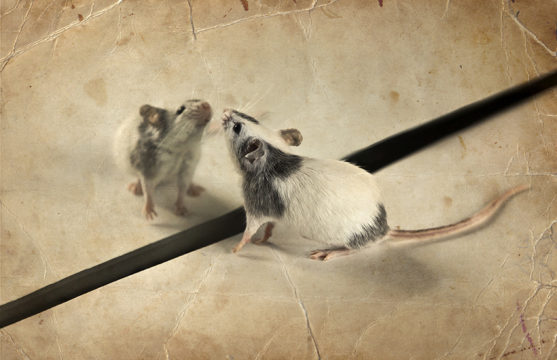 What are inbred mice, why use them, and how are they generated?

Inbred mice?  Knockout mice?  Transgenic mice?  Congenic mice?  Why so many?!  Inbred mice are mice that are genetically identical within a generation and across generations.  The use of these animals permits reproducibility and consistency across experiments in order to make definitive observations and interpretations that cannot be attributed to genetic variation.  For example, humans are an outbred species and each individual responds differently to the same influenza virus.  This is due to the genetic variation in humans in which some of us carry certain alleles for genes that allow us to respond better (or worse) to the infection.  Obviously, this makes studying the flu virus in humans quite difficult since each individual responds differently, which is not conducive for reproducibility and consistency.

Inbred mice also permit studies of genetically engineered mice that are missing a gene, usually called “knockout mice,” or with an additional gene, typically called “transgenic mice.”  In these examples, the gene is added or deleted in a mouse on an inbred genetic background to study the role of the genes in development and/or function.  Similar to the example provided above, being on an inbred background allows reproducibility and consistency across experiments.  Additionally, observations and interpretations can be attributed directly to the gene and not to genetic variability.

According to The International Committee on Standardized Nomenclature for Mice, a strain of mice can be considered “inbred” at generation F20.  This requires that brother and sister be mated for at least 20 filial generations.  With each generation, the portion of the genome that will be homozygous and portion of the genome that will be fixed in each individual animal increases, making the animals within each generation more alike.

What are congenic mice?

One of the most commonly used congenic mice for immunological studies is the CD45.1 congenic mice and CD45.2 congenic mice.  These mice are on the C57BL/6 genetic background except one strain expresses the CD45.1 allele while the other expresses the CD45.2 allele.  CD45 itself is a protein tyrosine phosphatase receptor expressed on all hematopoietic cells except mature erythrocytes and platelets and encoded by the Ptprc gene.  Wild-type C57BL/6 mice normally carry the Ptprcb (CD45.2) allele while the other (congenic) strain carries the Ptprca (CD45.1) allele on the same C57BL/6 genetic background.

The CD45.1 congenic strain was generated by crossing SJL/J mice, which carry the Ptprca allele, with C57BL/6 mice according to the process described above.  These mice can be purchased from trusted vendors such as the Jackson Laboratory or Charles River.

CD45.1 and CD45.2 cells are widely used in transplant and adoptive transfer studies to track the donor and host cells.  Leukocytes expressing CD45.1 can be transferred into wild-type C57BL/6 mice and then identified using expression of CD45.1.  Cells expressing CD45.1 and CD45.2 can be distinguished using commercially available antibodies that recognize each form of CD45.  For example, CD45.1 bone marrow cells can be transferred into a CD45.2 host mouse and then identified with an antibody specific for CD45.1, such as the A20 clone from BioLegend, at a later point in lymphoid tissues for infiltration and development into mature lymphocytes.  This antibody or any CD45.1 specific antibody will not react with leukocytes or mouse cells expressing the CD45.2 alloantigen.  Basically, the scientist is “conning” the host mouse into thinking the CD45.1 bone marrow cells are its own since they are from the same identical background so the host will accept it and allow the donor cells to circulate and/or develop in the context of the host environment.  If CD45.1 bone marrow cells from SJL/J mice are transferred to C57BL/6 host mice, the host will reject the donor cells due to differences in the expression of proteins based on the genetic makeup of the two strains of mice.  With an identical genetic background, the host will happily accept the donor cells and treat them as its own.  In most of these studies, the donor cells come from genetically engineered mice to study the role of the deleted or added gene in the context of a wild-type environment.  During the final analysis, the congenic markers allow the donor cells to be distinguished from the endogenous host cell populations to assess the outcome.

Cells from congenic mice that are genetically engineered can also be used in in vitro experiments to track cell development.  Cells from knockout mice on a CD45.1 background can be mixed in culture with CD45.2 wild-type cells to understand the role of the gene in development of the cell lineage fate and decisions in a wild-type environment.  Similar to the animal studies, antibodies against CD45.1 and CD45.2 can be used to identify the origin of the cells and their outcomes.  These experiments are faster and easier to perform and analyze compared to animal transfer studies.

iQ Biosciences offer cells that carry the CD45.1 or CD45.2 marker from wild-type C57BL/6 mice here.  They are well suited for in vitro studies and adoptive transfer in-vivo studies described above, or any studies that require discrimination of cells from different host populations.

About the Author: Omar Duramad, Ph.D.

Omar Duramad, Ph.D. brings more than fifteen years of experience in drug discovery and preclinical drug development for small molecules and antibodies. He oversees IQ’s In-vitro Assay Services (Testing, Safety, Toxicology, & Immunology). Prior to IQ, Dr. Duramad held positions of increasing responsibility at REGiMMUNE, IGM Biosciences, Neothera Biosciences, and Dynavax Technologies, where he led small molecule or antibody programs from early discovery through IND Filing. An immunologist by training, Dr. Duramad has received several awards such as the Schissler Foundation Fellowship in Cancer Research, American Legion Auxiliary Fellowship for Cancer Research, and the Vivian L. Smith Award for Outstanding Immunologist and has been an invited speaker at prestigious conferences such as Keystone Symposia, American Society of Hematology, and American Transplant Congress. Dr. Duramad obtained his B.S. in Biochemistry & Cell Biology from University of California, San Diego and Ph.D. in Immunology & Cancer Biology from the University of Texas, MD Anderson Cancer Center in Houston.