What is ADCC and why would you need it?

This is Part 2 of our series, “ADCC: The Antibody Awakens…the Immune System”. Miss Part 1? Catch up here. 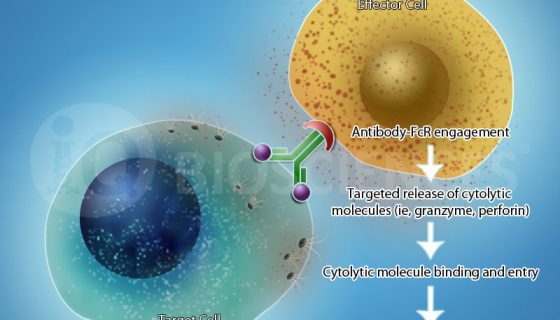 As alluded to in Part 1, one of the most important applications for ADCC assays is to identify candidate therapeutic antibodies that can mediate ADCC activity. Originally thought to prevent downstream signaling of the target receptor by blocking its oligomerization or engagement to ligands, most therapeutic antibodies are now suggested to work through multiple mechanisms, including ADCC. Thus, many companies screen their therapeutic antibody candidates for ADCC activity to identify ones that may be most efficacious due to their ability to mediate multiple mechanisms of action.

ADCC assays are also used to assess the biopotency of approved drugs before they are released to hospitals and clinics. In compliance with regulatory agency guidelines, each lot of antibody that is produced must be tested for efficacy and have consistent IC50 within predefined specifications. This ensures consistency between drug batches, in order to prevent variations in efficacy upon administration to patients.

How are ADCC assays performed?

Target cell lysis can be measured in various ways. Traditionally, target cells were loaded with radioactive chromium, and then radioactivity in the supernatant was measured after the reaction. However, newer and safer methods have been developed, including measurement of lactate dehydrogenase (LDH), which is given off by lysed cells, in the supernatant. Another method is to measure the loss of target cells by flow cytometry, wherein target cells are loaded with a fluorescent dye prior to incubation with the antibody and effector cells. After an incubation period, samples are run through the cytometer to assess loss of targets.

Most CROs with experience performing ADCC assays prefer the latter two methods due to safety concerns and assay sensitivity. More so, certain CROs, such as iQ Biosciences, will work directly with clients to design assays based on their needs and have a deep knowledge of ADCC assays to properly design these studies.

There are a few points to consider when performing an ADCC assay. First, the target cell line should express sufficient target antigen for the antibodies to form immune complexes. Without a suitable immune complex, the effector cell cannot become activated due to insufficient signaling.

Second, the effector cell type is extremely important. In general, most assays are performed with either human PBMCs or NK cells. This determines the effector-to-target ratio used; the ratios tend to be larger when using PBMCs compared to NK cells. However, using NK cells requires purification, which adds a potentially unneeded step and cost. In both cases, the effector-to-target ratios are non-physiological as target cells most likely outnumber the effector cells in a physiological setting. In general, these assays are designed to determine the presence and effectiveness of ADCC activity and not necessarily biological mechanism.

In addition, the CD16 allele of the donor may be relevant since it comes in high- and low-affinity forms. The majority of the population has at least one copy of the low-affinity allele, which is 10-25 times lower in affinity than the high-affinity form for the Fc portion of antibodies. In some reports, patients with the high-affinity form respond better to treatments compared to those with the low-affinity form, suggesting a relevant role for CD16 polymorphism in terms of therapeutic antibody treatment. In other cases, there is no reported difference in efficacy as a function of the two forms. Regardless, the genotype of CD16 expressed by effector cells may need to be considered depending on the situation.

Currently, there are no commercial cell lines available to employ for ADCC assays. However, this may change, as there are companies that are working to license their proprietary lines that express the high- or low-affinity form of CD16 to the general public.

When selecting a CRO to perform ADCC assays, researchers should look for those that have extensive knowledge and experience performing these assays, such as iQ Biosciences. Having these qualities will ensure that your experiments are optimally designed to obtain the most relevant data.